In this guide you’ll learn:

(If you're looking for a complete list of current Casio models, check out our Casio keyboard models list page.)

But before we dive in, let’s answer the most common questions about Casio keyboards:

We get asked that question pretty often! Some people seem to still have an impression of Casio from the 1970s, when they were known as a manufacturer of cheap, poor-quality electronics.

The fact is, Casio has upped their game since then (waaay up. Their digital pianos now win awards and their G-Shock line of watches are known as the toughest  in the world).

One of the great things about Casio is their focus on low cost along with good quality – which means many of their keyboards are similar quality as Yamaha keyboards, but at a lower price.The best Casio keyboards in the beginner-to-intermediate level range from $39 to $600, with their intermediate-to-advanced models ranging between $600 and $1,000.

There are bunch of great low-cost beginner keyboards made by Casio. A few of our favorites include:

Here are our top 8 Casio keyboards, based on the best-value combination of price and features: Unlike the large (and complicated) number of Yamaha series, Casio keeps their piano keyboard and digital piano series simple.

A digital piano usually costs more, has more features – including a full 88 keys – and sits in a “console”, which is a traditional-style cabinet.)

Casio’s Portable line of keyboards allows users to easily carry around their keyboard without causing damage to their instrument, while keeping the same great quality sound.

The Portable line has a bunch of different keyboard series. Here are our favorites: 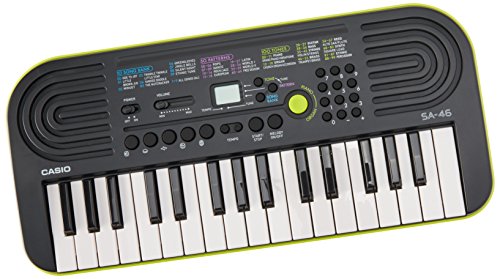 The SA Series is the cheapest line of keyboards produced by Casio. These keyboards are great for small children, because they allow kids to get a feel for piano by playing.

Note that the keyboards in the SA Series are not proper piano-type keyboards, because they have a maximum of 44 keys (whereas an acoustic piano or high-end digital piano has 88 keys), and they don’t have touch-sensitive or weighted keys.

But if you’re looking for an inexpensive way to get your child into a keyboard, it’s hard to go wrong with the SA Series. 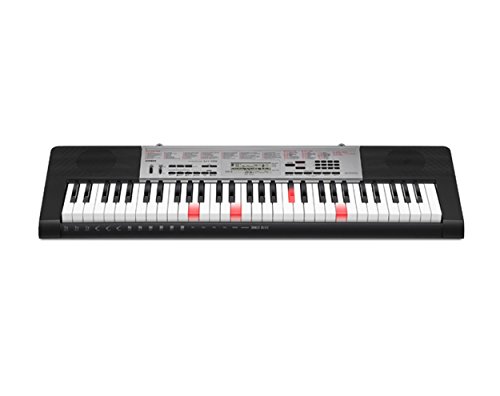 The LK Series consists of keyboards that use “lighted keys” (that’s where the “LK” comes from!)

You can probably guess what lighted keys are – keys that light up to show you which notes to play. This is an awesome feature for helping new players (especially kids) stay motivated and feel like they’re improving.

And here’s a video showing how cool the lighted keys feature is:

The CTK Series strikes a balance between price and value, with all keyboards in the series having 61 keys (the minimum recommended by many piano instructors for learning to play a piano).

The keys on most models are also “touch-sensitive”, meaning the harder you press a key, the louder the sound it makes.

The CTK series is also notable for the large number of “tones” (i.e. sounds) each model has 400 tones.

These are the best-value CTK keyboards: 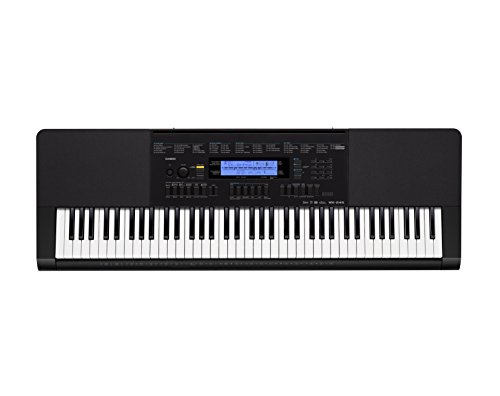 The WK Series is a step up from the CTK series, because each model has 76 keys (versus 61 keys for the CTK series), along with 600+ tones.

The additional keys and other features make the WK a better option than the CTK if you (or your child) plans to progress to playing on a real piano.

Here are two of our favorite WK models:

The digital pianos in Casio’s Console line include the Privia Series and the Celviano Series.

The pianos in these series come in traditional wooden frames (to look like acoustic pianos) and are Casio’s answer to the Yamaha Arius Series of upright digital pianos – but at a much lower price.

The Console pianos come in a wooden case and give players an authentic piano sound – both looking and playing great!

These are our favorite Casio Console models:

And here’s a great video by Casio showing you the features of the Console line (in this case, the Privia PX-870):

Casio`s stage pianos are a range of digital pianos which are excellent for stage performances, giving both a great sound, with portability, and offering an authentic feel when playing.

If you’re interested in a Casio stage piano, take a moment to check out this video demonstration of the PX-350:

Background on Casio (For the Piano Nerds!)

Interesting fact: the very first product created by Casio founder Tadao Kashio was a finger ring that would hold a cigarette, so the wearer could smoke the cigarette down to the nub!

(This was just after WW2, mind you, and Japan was in ruins and dirt-poor. Certainly not the country it is today.)

Casio’s second product was a calculator, which was hugely successful and started the company on the path to becoming a massive electronics company, including the world of electronic keyboard instruments in the 1980`s.

Casio’s keyboards were at first infamous for being poor quality, but since then, they have upped their game and now Casio stand as a reputable keyboard and digital manufacturer.

Casio started out in Japan in April 1946 – as Kashio Seisakujo, but it wasn`t until 1980 that they made and sold their first keyboard – the CT-201. The CT-201 imitated the voices of other musical instruments – albeit, very badly! – and from this, Casio developed a wider range of increasingly innovative keyboards.

In 1983, Casio released the Mini keyboard with ROM pack. The keyboard had eight monophonic voices and 16 pre-recorded rhythms. This was quickly followed by Casio`s CZ-101 - their first synthesizer which uses Phase-Distortion technology.

Since then, Casio have continued to develop their keyboards and digital pianos to be one of the main keyboard manufacturers globally.