The Yamaha YDP-103 Arius Series Digital Console Piano is the most affordable piano in the brand’s popular Arius line of console pianos. It’s designed to place the features of Yamaha’s popular digital keyboards in a piece of attractive furniture, giving you the experience of playing an acoustic piano with all the convenience and advanced features of a digital piano. But is it worth the investment?

With its GHS weighted keys, AWM sampling, and realistic pedals, the Yamaha YDP-103 Arius Series Digital Console Piano is designed to give you the look, feel, and sound of playing an acoustic piano in your own home. But its digital capabilities, including app integration, recording and playback, polyphony, and instrument voices offer musical possibilities that go far beyond what an acoustic piano can do.

The Yamaha YDP-103 is the exact same keyboard as the popular Yamaha P-45 model, but without the portability and in a handsome console.

To make things a little more confusing, when ordering online, the Yamaha P-71 is ALSO the same keyboard as the P-45 and YDP-103, just in an Amazon exclusive model at exclusive pricing.

To make a long story short, you could purchase the Yamaha P71 from Amazon at a much lower price than the Yamaha YDP-103, and still have the exact same keyboard sound, features, and playing experience, but without the console.

Who the Yamaha YDP-103 Most Suitable For?

The Yamaha YDP-103 Arius Series Digital Piano is designed for someone who wants a good digital keyboard in a handsome console at an affordable price.

It’s perfect for people who played piano in the past and want to take it up again, a music student to practice and rehearse with, or simply people who want to share their love of music in a casual setting.

It’s also a great option for halls, classrooms, and event spaces, where music can be created and shared without investing too much in an instrument that needs care and tuning.

What’s Included in the Box?

The Yamaha YDP-103 Arius Series Digital Piano comes with a furniture-style bench. However, the bench does not have storage like many piano benches do.

An Alternative Keyboard to Consider

While Yamaha is smart to make a more affordable console piano, it’s a bit of a challenge that they simply placed a lower-priced keyboard into a console. The fact that it is identical in sound, features, capabilities, and playing experience to the more affordable P71 is a drawback.

The obvious alternative to the Yamaha YDP-103 Arius Series Digital Console Piano is simply to purchase the Yamaha P71 digital keyboard from Amazon and then get a stand, bench, and pedals as separate accessories.

Purchasing the keyboard by itself gives you more versatility and options with portability, and you can choose the piano playing setup that works best for you, without being weighed down by a console.

Advantages of the Yamaha P71

Advantages of the YDP-103

It comes with a furniture-like console

It comes with a bench

It comes with 3 pedals

Or, if you really want an exceptional Yamaha digital piano, in a console format, in this price range, it’s worth taking a look at the YDP-S34. Like the YDP-103, the YDPS34 has the look of a traditional piano, with a wood finish, and three pedals.

It also has a fully GHS weighted keyboard, and realistic pedal behavior. It’s a slimmer console, that is a few inches shallower and a couple pounds lighter than the YDP-103, designed to fit into a smaller space. But it’s a newer Yamaha model, and has some features well worth considering.

It has Intelligent Acoustic Control, damper resonance, and Stereophonic and Acoustic Optimizer capabilities

It has a larger onboard song library

It has record and playback capability

It has more powerful speakers

It is compatible with the Smart Pianist app

Advantages of the YDP-103

It is slightly less expensive

It comes with a bench

While the YDPS34 is a new model, and therefore doesn’t have the history and legacy of older Yamahas, it’s an excellent compromise in an affordable console, and the new CFX sound engine is superb. It would be a smart consideration against the YDP-103.

Because the YDP-103 relies on apps and iOS devices to provide some functions that are lacking in the piano itself, and because it’s easier to access and modify many of the piano’s settings in the Digital Piano Controller app than using the buttons on the keyboard, a Bluetooth adapter is highly recommended.

The Yamaha UD-BT01 is compatible with this device, and removes the hassle of managing USB cables while working with your digital piano.

The Yamaha YDP-103 combines their most popular portable keyboard and an entry-level console, for their most affordable console piano with their most in-demand digital piano features.

While it does fill a niche in the Yamaha product line, it’s a compromise model. It seems like a better choice to spend just a little more and get a better console piano, or spend a lot less and stick with a portable model. The YDP-103 is a good piano, but isn’t the best of either world 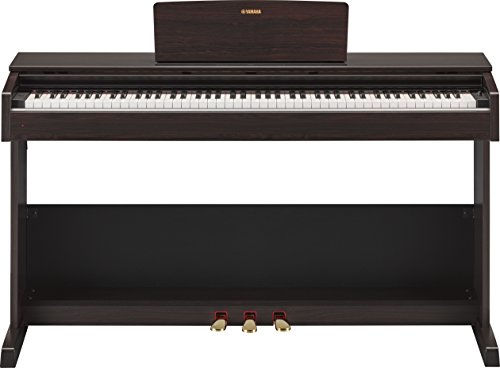 Piano Keyboard Review is supported by its audience. When you purchase items through links on our site, we may earn an affiliate commission. Additionally, as an Amazon Associate, I earn from qualifying purchases.